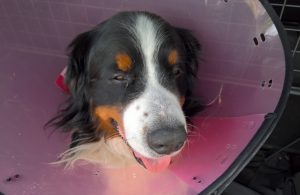 Just lately I have had lots and lots of trips to The Vet. Which is basically A-MAZ-ING!

In fact, They were beginning to suspect me of fabricating issues just to get to go more often. Gross, offensive and false accusations, obviously, but I can see where They were coming from.

However, it does have to be said that although my enthusiasm for all things The Vet is utterly undiminished, I have had some rather delicate indignities visited upon my person in the last few weeks.

I shall spare you the gory details, but long story short after what discretion leads me to describe merely as a couple of alarming incidents involving blood in all the wrong places, it was decided that the appropriate medical solution was to delicately adjust my rear-end balance and trim. 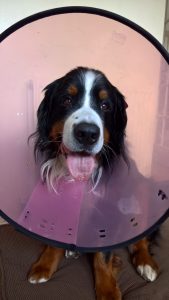 Not content with the various trips for tests, scans, checks and the pre-op prep, I managed to wangle a couple more courtesy of a random unexplained limp, and the resultant discovery of a lump on my hip. Get in! Three trips to The Vet in just one week!

All of which was fantastic. 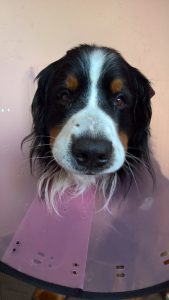 The drugs are wearing off. Send more drugs.

For lo, when They came to collect me after the removal of three, erm, lumps (the intended rear-mounted duo, plus a bonus on my hip), I found myself ensconced in a Cone of Shame. And not just any Cone of Shame, but a pink one! I mean, come on folks. By all means un-dog me, but lay off the old-school gender mockery and stereotyping!

Have to say, not a fan of the Cone of Shame. At first it was fine, apart from a certain impairment to navigation. However, as time went by and the drugs wore off, it became less amusing.

Faced with adversity, I persevered with a number of strategies to minimise my distress. Walking into doors, chairs, ornaments, and creating general destruction indoors had no effect. Resorting to moping did at least elicit some cuddles.

Outside I fared slightly better. First attempt was in the garden, where bouncing around using both front paws to try to scrape the thing off got a definite reaction. Unfortunately not a reaction that resulted in the removal of the Cone, but a reaction is a reaction, and one takes what one can get. Which appeared to be not being let out unsupervised, lest I burst my stitches. A few days later I improved on this by going for the “drink from the duck-weed-laden pond whilst wearing Cone” trick. Some definite success there, as the Cone was removed! Then re-applied, after a quick wash and dry. Hrm.

Ultimately the best result came from walking. Or rather, not walking.

A pink Cone of Shame at The Vet? OK, fair enough.

A pink Cone of Shame around the house? If I must.

A pink Cone of Shame on a walk, in public? Not flipping likely.

Should you find yourself in a similar dilemma, the correct approach to take is to stop at the end of the drive and repeatedly walk into the wall. After a few minutes, condescend to move a couple of paces whilst scraping the Cone along whatever wall, bush or road furniture is available. Stop. Circle. Turn around. Look helpless.

Soon you will find the Cone removed, and a conventional walk can be enjoyed. Even if at the end of the walk one finds oneself re-Coned at home.

Feeling sorry for myself

Still, what’s a fortnight of Cone-related shenanigans between friends?

Now I just have to grow my hair back. Glad it’s summer, or the breeze could be a bit much!

Oh yes, and plot my revenge against the nurses, who apparently laughed at my unmentionables whilst they were being removed. How very rude!