… and I have indeed been working like a dog. Well, I would, wouldn’t I?

Life has changed. I’m given to understand that in years gone by children were put to work at a very young age. I bet they were able to get past eight months. Not me. Nope, eight months old, and already being dragged to the office. 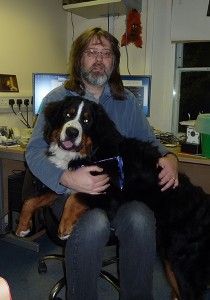 And so I have succumbed to the drudgery of work. Early starts, forced into labour against my will, bored stupid by mid-afternoon but unable to leave and do something more interesting instead. Ignored by the boss, constantly overlooked, and largely abandoned to find my own way in the world.

Still it’s not all bad. The plus points of office life include:

Button is super. She’s another dog, but proper petite. She’s a terrier, and lives upstairs. I like Button.

The daily grind can get to one a little, however. I have to get my walk in before 09:00 and then it’s all phone calls and deliveries and not being allowed to bark at people when they clearly need to be barked at. Quite frankly some of them need more than barking at, but oh no, apparently that’s not “professional”. Pfft. Late morning walk, then more of the same until lunchtime and beyond. Oh my word but the afternoons grind slow.

Sometimes though, after a particularly taxing meeting, I have been known to take an executive power nap. Putting in the hours that I do, it’s my only choice. 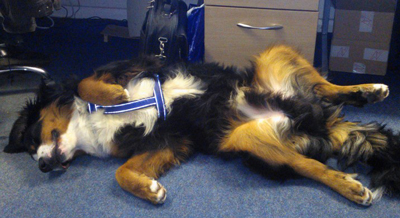