Oh my good golly goodness. Too new, too much, too quickly.

The two-leg pack-mates I’ve met a couple of times turned up at home tonight, and I got to go in the Big Room. Not been in there before, so that was quite daunting. Then I found the cat’s toy – Ha! It squeaks! Mine now! Stole that. The two-legged ones were fussing about stuff, but it didn’t sound very interesting. Next thing I know Bam! Airborne! And being carried out of the front door – that’s new, too. Lots of new.

Ah, looks like I really am moving home. Can’t say it’s a wildly exciting experience. The female one got into a strange smelling car, then I was plonked unceremoniously on her lap. She had lots of towels – I don’t think she trusts me, which is just a tiny bit insulting. I showed her, though. Didn’t wee until we made it to the end of the trip, which quite frankly showed more consideration than they probably deserve.

The whole experience was a bit random. Didn’t much like the “M25” that I’ve heard people moaning about – although the two-legs seemed to think it was “pretty good for a change”. Let them know they were wrong by panting and squeaking all the way round it. Ran out of steam just after we left it for another road. Apparently I was “very, very good”; well, obviously, duh!

After, like, forever the car eventually stopped and the female two-legs put some red noose thing around my neck before the male one hoiked me out of the car. Cripes! Do they hang puppies around here?!

Luckily they don’t. Or at least, they haven’t yet. I got taken to a nice bit grass to do a satisfying wee – well, it would have been satisfying if the stupid big one had realised that was what I was doing, and not picked me up halfway through to move me.

After that we went inside, which was a bit weird. I think I preferred the grass, quite honestly, but I did eventually conk out a little bit, for a short while. More on the rest of the night to follow … 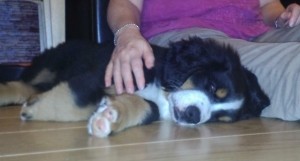 A small chill before bedtime