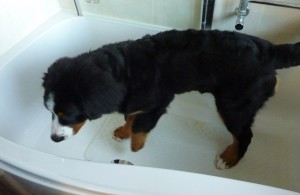 I thought today was going to be a Good Day. He stayed at home, and it’s not even the weekend. Everything was calm and lovely. They even deliberately left the stair gate open. I should have spotted something was up when I got upstairs and all the doors were closed. And She was waiting in extra scruffy clothes. But no, trusting soul that I am I trot into the only room I can and sit down for a treat.

Apparently I was wrong. What happened next was scarring, scarring I say. 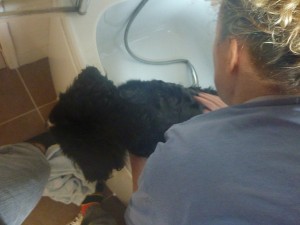 No warning, just dumped in the big white tub thing. Not a clue what’s going on, but it feels a bit weird. I’m stood on some squishy grippy thing, and I don’t mind confessing I’m a bit out of sorts. I may, and don’t shout this about, but I may have wee’d just a little bit. Don’t really want to stay here so I’ll just climb … oh, no, apparently I have to stay here after all. This is not right.

Hot rain! What the flippity flip is that about?! They’re making it rain on me. How do they do that? Outside rain is OK, I quite like that. In fact, I’ll sit in it for hours whilst They stand there urging me to get a move on. But inside rain? Not a fan. Definitely not a fan. Why the hell is it raining inside anyway? And why is it warm? I shall look dejected, it’s my only remaining ploy.

Turns out it wasn’t my best ploy ever. So … I’m stuck in this big white thing, I’m drenched, and then She starts sploshing some slimy stuff all over me. At least he’s now feeding me treats like a slot machine cashing out the jackpot, but still … not entirely impressed with the turn the day has taken. 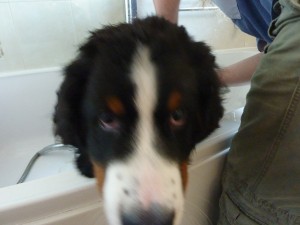 Really. Let me OUT!

Anyway, long story short, this weird behaviour continues for considerably longer than I would have liked. Just when I think it’s time to actually get out, all the sploshing and rubbing and faffing having stopped, more flipping hot rain and rubbing! And then towels.

Now, towels are OK. I like towels. Towels you can tear up, and sneak in a crafty bite by pretending to ‘accidentally’ catch one of Their hands whilst they dry your paws. But what with all the upset, I completely forgot about that, and just stood there whilst the whole towel thing went on. And on. And on. Don’t know how many they had, but there was a mountain of them. So much so that by the time we got to the end of it all I was kind of enjoying it. 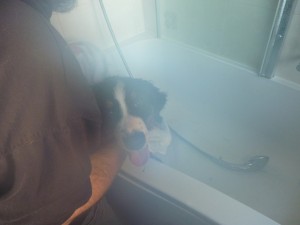 The ordeal begins to end

However … if anyone comes near me with that Blower Of Hot and Disturbing Death again, I’ll rip their throat out and wee down the hole, so I will. Not just back away a bit like this time. Backing away a bit doesn’t work. They trick you with treats and make you stand still. So next time, it’s throat ripping, and no messing about. They’ll see.

The worst thing is, I still have no idea what the heck any of this was about, but apparently I am no longer a “smelly dog”, and my coat is “lovely and shiny”. Or I was, until I tried to walk on the net They’ve put over the pond in the afternoon. Turns out that wasn’t my best idea ever.