I keep being told I’m not interested in toys. I’m not sure that means what They think it means. If it means that I love my toys lots and lots, and enjoy playing with all of them, then They’re right! Otherwise, I think they may be a little confused. Again.

Whatever, today I want to share with you the Joy of Toys. When you haven’t got a mum and sister to play with anymore, you need something. Toys are my something, and I love them.

The one at the top is my Red Bone of Squeaking. It’s fantastic, and was a present from some of my early visitors. Him & Her didn’t think I’d like it, and were worried that J, L & M would be upset. Fools! It squeaks! It’s chewy! What’s not to like? 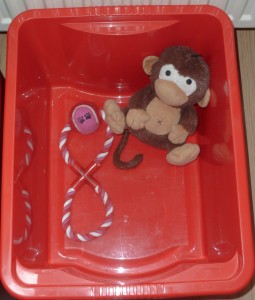 For a little while my only toy was Monkey. He’s great, although our relationship is slightly abusive. He sits on the floor, and I try to rip his tail off. He seems to like it though, as from time to time he makes little squeaks of encouragement.

Monkey does get some time off now, though. As you can see on the left, he gets the odd time-out in my toy box. That’s because I have lots of toys and can pick and choose! Yay!

So far I have Bone of Squeaking, Monkey, an indoor tug-toy, garden tug-toy, a ropey thing, a coily thing, Bone of Crunching, hide bone and loads and loads of chew toys that sometimes have food in, and my reindeer antler. Not a whole one, you understand, just a puppy-size nibble. Oh, and I also have this ace thing called “Charlie’s Ball”. No idea why; it’s my ball, after all, but whatever, it’s still fun to play with. 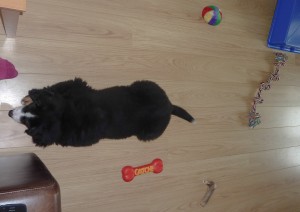 Just played with all of these

If you’re thinking of getting lots of toys, I should pass on a top tip. It’s great having them all, but sometimes you’ll just get overwhelmed with choice. At times like that all you can do is spread them out as much as possible and have a snooze until inspiration strikes. Trust me, it will, soon enough.

To be honest, taking regular breaks is quite important anyway. Toys can really sap your energy, what with all the concentration required: finding, chewing, chasing, bashing, squeaking. It fair takes it out of a dog. But that’s fine. Play hard, sleep hard, that’s what I say. 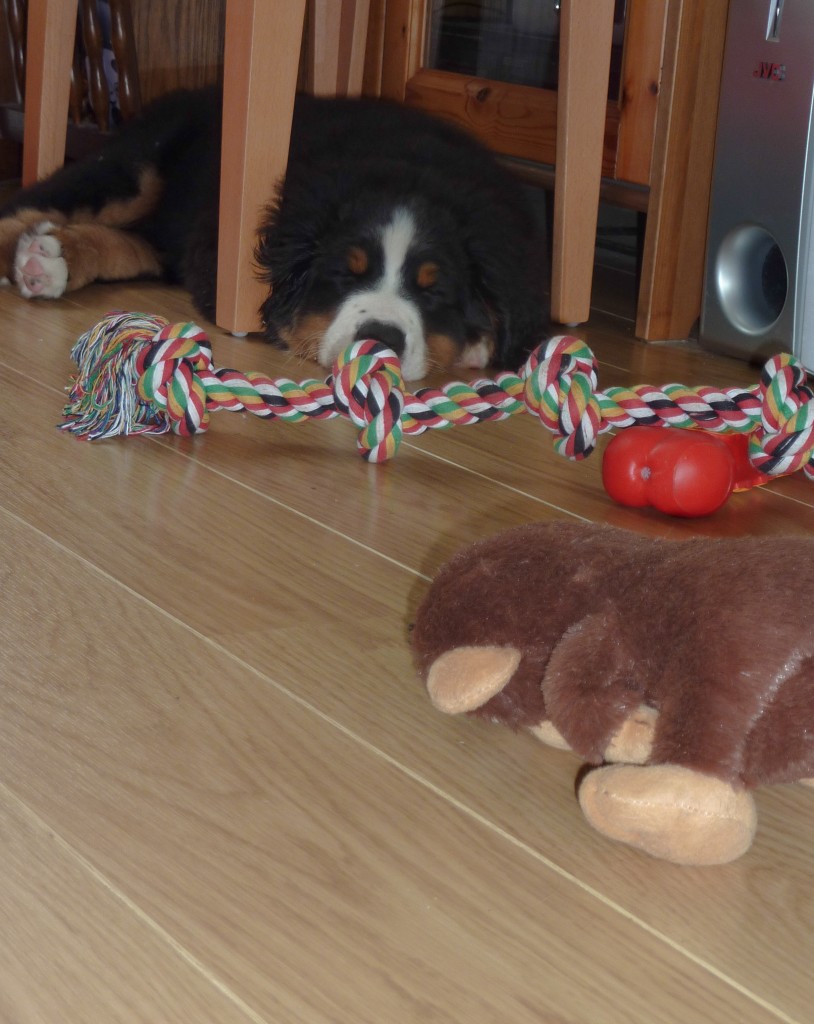