I’ve been in my new home for nearly 48 hours now, and an awful lot has changed already.

It’s probably a little early for too much reflection, but my first night here was pretty flipping intense, it has to be said. Late night car rides, strange people, strange smells, strange places. Even strange grass for the toilet. I definitely had a bit of a wussy freak-out overnight, and was quite glad to be able to crash next to Him on the sofa. I don’t think either of us got much sleep, although it has to be said the following morning I was much more content, as the rather indiscreet snapshot shows (sorry folks, NSFW really, but I can’t help it, I was papped).

Later that day I got to meet some more family, although the cat I think I live with has been strangely absent. Seems a bit standoffish, I have to say.

In the afternoon I was lucky enough to meet His mum and Her mum and dad. They seemed OK – they gave me treats and fuss, at any rate, which is all that really matters.

Got ever so tired in the evening. There was a BBQ outside and just way too much going on. I wanted to sleep but people kept moving and talking and insects and stones and grass and people and insects and stones and chairs and … Eventually had to give up and nag Her to take me inside. Settled down, then they were all just Doing Stuff and, well, all too much, I had to go back out even though I was very yawny. It did mean I slept much better that night (although still not in that stupid crate thing).

Today, it turns out the stupid crate thing isn’t actually as stupid as I thought. I’ve been getting to know it a little better, with some help from pack mates and friends. Felt like a bit of a sell-out, but I even slept in it a couple of times. I suspect I’m going to have to be very stroppy about it tonight in order to reinforce my position.

Didn’t see Him all day – he was at something called “work”. She tried to explain it was somehow related to me getting food, but I’m not sure I believe her. He came back in the evening, though. With toys! 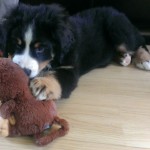 And so began a few rounds of “Kill The Monkey”. This is great fun, and almost better than eating feet and chewing blankets. I’m considering promoting Monkey to being the number one thing I want to destroy, but not just yet. There are still lots of other interesting fabrics around, although somehow Monkey always appears just as I’m getting stuck in to them. It’s almost as if he wants me to kill him. Go figure.

I also got some new chews, and all manner of exciting things.

All in all, quite a full two days. New family, new home, new ways of life, masochist monkey, and I’m even softening on the whole crate thing. In fact, I think I’ll head off there shortly, at least for a little while [All night mate, all night, Ed.]

Tomorrow I’m hoping to meet some more new people. One of them’s a dog trainer, too; that should be fun!

One Response to “Settling In”