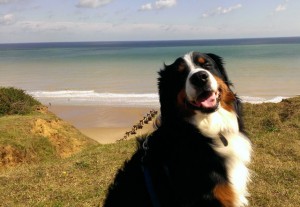 I had my first actual, proper, real Holiday a few weeks ago. Apparently it was All My Fault that I didn’t get one earlier in the year because I got ill, and They kept making cutting remarks about “Let’s hope we get to stay for more than 48 hours” and “At last, a holiday … dog permitting” and “With a bit of luck he’ll actually let us get some rest”. Bloomin’ cheek.

Anyway, we went back to Norfolk to the same place They tried to go to last time. Don’t know why, but it smells quite strongly of His dam. And it did not smell AT ALL of my poo, despite what they were muttering about all the way down in the car. So there. Rat bags.

This is only a snapshot of Holiday life, but I thought I should share some of the highlights …

Getting away with evil 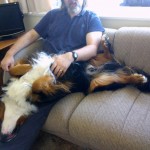 Love me, love my tummy 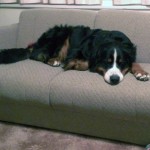 This seemed to be something you could definitely do on holiday. At home They are constantly telling me to get Off the sofa. To get Off Them when they’re sat on the sofa. Basically just to Off and have no fun whatsoever.

Turns out that when on Holiday you can snooze on the sofa, and fulfil your ambitions to be a lap dog with impunity.

This is, unequivocally, a Good Thing. 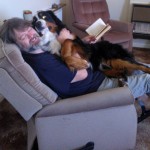 I DO fit on laps!

Although you do get chucked off for wriggling, which is a bit unfair. 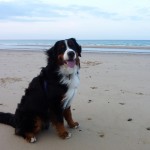 The Beach is a special place made of stones and squidgy stuff, where you can run around and completely ignore your Them, no matter how much They call to you. This makes it a lot like any other place where you go for a walk without a lead, but wetter and weirder.

For some reason He kept throwing my SafeStix around. I have no idea why, as there were much more interesting things to do. Eventually He worked this out and stopped throwing it, although both He and She seemed to enjoy picking it up for a little while.

Also, don’t drink the water. It’s horrid. Trust me, I kept trying, and it didn’t get any better. 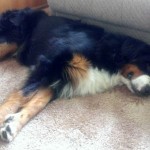 The secret to a Big Walk is to just keep on going and don’t crack on at all that you are in any way tired. This is best accomplished by charging to get to particularly good Sniffs and or digging in when a special Sniff has been found and refusing to move on. The full combo can be achieved when on-lead by charging to a Sniff, dragging Them after you, moving on as they catch up, then doing the dead-stop-full-anchor as soon as they’re a pace ahead.

No matter what, on returning to base do not ever, ever, indicate that you’re too tired to even try to climb on the sofa. I had some close calls, but I think I got away with it, and no-one suspected anything. 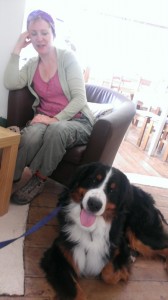 Morning at The Corner House

What I especially liked about The Corner House was how I could lie right in the middle of the floor and everyone would just walk over me. Some of them seemed a bit nervous when carrying full trays, which I think is very untrusting, but as they were so nice in other ways I have decided to overlook it.

Even better, I wasn’t the only dog who went there. I thought I was, the first day, but later in the week there were loads of other dogs, which was extremely gratifying, and not a little exciting. Fortunately this in no way led to any kind of disturbance or control issues. And don’t listen to anyone who tells you otherwise.

They had me back, anyway.

The absolute, absolute best bit about Holiday was that I had Them all the time with no distractions, attending to my every whim. Which is as it should be. Coming home has therefore provoked a minor depression, as They have gone back to w**k and other standard activities, taking away from the all important Me time.

Also, they’ve done something with The Cat whilst we were away. He was here when we left, and I’ve not seen him since we got back. This is most unusual, somewhat disconcerting, and highly irregular. I begin to suspect foul play. Recent attempts to appease me by referring to The Cat as being “on the side, ready to go in the garden” are not washing. I can see the side, and there’s just a small cardboard box there. Where are you, Cat? I miss harassing you at mealtimes. Mealtimes are no fun any more.