What are you insinuating?

I like gardening. Unfortunately They don’t seem to do a great deal of it, although I have heard mutterings about “when I used to be able to garden, before the flipping dog” from time to time. So it’s probably a good thing I like gardening, because it means I can help. Which is nice. Always good to put a little bit back.

I try to do a little bit of helping most times I go outside. There are always leaves to clear up, stones that need moving (and occasionally disappearing), and frequent side-projects. A recent success was the removal of a whole line of bamboo canes from around the pond. I only had to uproot six or seven, and chew off another pawful before they got the message and removed the rest for me. Everything is now much more attractive with some large flower pots weighting down the net. And it sags a bit more, so I can drink out of the pond again. Result.

Currently I’m particularly keen on relocating one of the bird feeders. I just need a little more focused time to complete the initial excavation, then I can drag it to somewhere much better. Although for some reason I’m being discouraged from what is clearly a work of design genius. It’s very hard to work under such negative conditions. 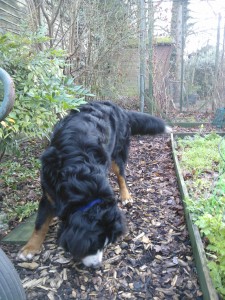 Ah, bark; something I can bite

The wet weather hasn’t been much fun. The lawn’s like a bog, and the twigs aren’t nearly as crunchy as I would like. However, one happy side effect has been the wind blowing down the barriers that kept me away from the vegetable area. I’m not too fussed about the vegetables themselves, but tidying up the bark paths (primarily by consuming the bark) is one of my most favourite tasks. Although again, one that does not always appear to be welcomed.

Over the last few weeks I’ve also discovered the raised herb bed. This is an extremely exciting place, and needs a lot of attention. I’m preparing a new hole ready for planting; still need to choose what’s going in it, but it pays to be ready. I’m having to conduct this project with a certain degree of stealth. Every time one of Them sees me in the herb bed I seem to end up in trouble and get called off. I have my ways, though, I have my ways. 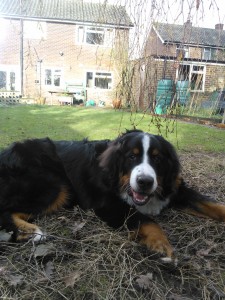 Dunno what it is, but I’m going to eat it

The only thing I really struggle with is initiating a decent game of chase. It ought to be simple, and a chap needs a bit of r’n’r as a break from all of the helpful stuff. But no, nobody wants to play catch-the-dog-with-the-stone any more.

I have had some mild success by swapping terracotta pots for stones, but they’re a nuisance to carry, and keep shattering when I drop them. Maybe when the rain lets up I’ll get to play Frisbee and FunnyShapedBallThing again – those are fun, but not too great when they lead to me ploughing furrows in the grass. Or so I’m told.

Roll on Spring, I think I’m going to like daffodils, whatever they are … [If you haven’t killed them all, Ed.]