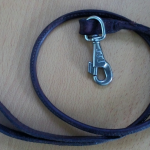 I am coming to understand that The Lead is a very important item, and carries with it a host of complex social and behavioural obligations. My early experiences were decidedly mixed, but They have persevered, and I think I’m getting it now. One can say a lot with a lead.

The rules for styling one’s lead are quite simple, according to Them. I beg to differ, and am setting forth my own maverick approach, breaking free from the oppressive strictures of tradition and convention. Although They tell me that this is an equally conventional thing to do, I scorn their petty and pathetic attempts at reverse psychology.

So, Gibson’s Guide To The Use of Leads: essential reading for the aspiring pup.

In the garden
This is quite a complex scenario. One must factor in time of day, tiredness of owner, and precise urgency of bladder or bowel. The ground rules are quite simple, however, and once these are mastered you may mix and match, and throw in personal twists to your own taste and sense of style.

Rule 1: trot out keenly at almost all times, but throw in the odd reluctant  house exit at random, for no good reason. Keep them guessing.

Rule 2: switch between perfect behaviour (walk loosely to heel, “do a busy” or “do a poo” according to the moment, in the latter case wait during Operation Bag, then walk loosely to heel back inside) and something I like to call The Flip You. The Flip You involves  appearing to be keen to “do a busy”, then sitting, or ideally lying (especially if raining) in the middle of the lawn and setting like concrete. If you concentrate really hard you can actually increase your body mass and density by a factor of at least 10, becoming an Immovable Object that recognises no Irresistable Force[1].

Rule 3: give absolutely no indication as to which tack you will take under Rule 2 until They are committed to using the lead. This creates the perfect impasse for Them and can provide endless hours of sullen amusement.

Rule 4: never forget the potential that a lead has to become a tug toy (as mentioned in Hell Beast mode).

On Walkies
This is much more straight forward. If taken Out The Front simply go absolutely bananas. Pay no attention to any of the commands They are deluded into thinking they’ve taught you. Leap, pull, tug, be frantic. Pick a target, charge to it. Once there, refuse to move on. 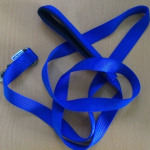 Lead Of The Future

Allow for an occasional moment of clarity if presented with CHEESE but, and this is very important, accept no substitutes. When Out The Front it requires no actual effort to develop this behaviour as there is just so much exciting stuff. The only downside is that you will have to be prepared for the disappointment that there are people in the world who aren’t interested in you. Personally I suspect these people are merely actors, put there to bulk out the scenery, and am beginning to treat them with the disdain they clearly deserve. Idiots.

Building For The Future
These are clearly foundational behaviours which can be built on and developed over time. I am promised a nice new lead just as soon as I’ve got all mine properly honed. I suspect there may be a difference of opinion on what that means, mind.

[1] Other than the Pick’n’Carry which I consider to be cheating, quite frankly